We are delighted to announce that Rabbi Baruch Frydman-Kohl, our Rav Baruch, has been appointed to the Order of Canada.

This most prestigious honour is well deserved and recognizes his lifetime of service to the Jewish people, to the city of Toronto and to the citizens of our great nation.

Rav Baruch has been a spiritual guide to thousands and he has represented our kehillah (community) with distinction.

As noted in the Governor General’s announcement:

"The Order of Canada is one of our country’s highest civilian honours. Created in 1967, the Order of Canada recognizes outstanding achievement, dedication to the community and service to the nation. More than 7,000 people from all sectors of society have been invested into the Order. Those who bear the Order’s iconic snowflake insignia have changed our nation’s measure of success and, through the sum of their accomplishments, have helped us build a better Canada."

Her Excellency, the Right Honourable Mary Simon, Governor General of Canada, announced 135 appointments to the Order of Canada. Its Companions, Officers and Members take to heart the motto of the Order: Desiderantes Meliorem Patriam ("They desire a better country").

Appointments are made by the governor general on the recommendation of the Advisory Council for the Order of Canada. 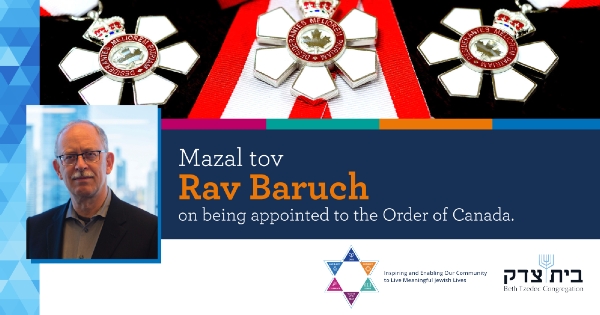